Company Jump Back by Popular demand

Posted on August 15, 2016 by ironmountaintheatre

The Andrews Sisters (Andrea Isaak, Marie West and Nadine Tremblay) look forward to taking the stage once again at The Fernie Museum Fundraiser Gala Saturday October 29. This year’s theme WWll and 1940’s era will dazzle you with big band sound, antics and swing style. Come out and support the Museum and take in a classic IMT favourite show at the same time.

Electro Social Club is Back

Posted on February 4, 2014 by ironmountaintheatre

Back by popular demand.

It’s about the beat and the freaks you meet
Electro Social Club invites you to the dance floor where DJ’s spin stories and you are the show. Meet all the typical nightclub freaks- The Dance Fluffer, the Pick-Up Artist, The Forever Raver, etc….Maybe you already are one. This visual, interactive, EDM experience will blow your mind.

Original Music by Sonicanimation and NightBandit
Script by Mark Pollard

Casting Near You Soon
Visit Our Show page for more information

Escape to the Escapades of Electro Social Club

Posted on September 7, 2012 by ironmountaintheatre

I like the way The Telegraph describes it. Read all about it here. http://rosslandtelegraph.com/news/escape-escapades-electro-social-club-20772#.U

Please note venue change. Now Friday Sept. 14 at The Flying Steamshovel.  Ticket is a download card with your own special code to hear the album ahead of time.

Posted on August 1, 2012 by ironmountaintheatre

Counting down the days……..Thanks to the Columbia Kootenay Cultural Alliance and co-presented with the Rossland Council for Arts and Culture, Iron Mountain Theatre brings you the world debut of their newest musical August 12, 13 and 20.

Do not miss it!!! 6 person cast, live band on acoustic instruments, based on true story.

Posted on January 27, 2012 by ironmountaintheatre

Ski Bum Returns to Golden City – By Adrian BarnesLast winter Ski Bum: The Musical took the Mountain Kingdom (and other mountains and their kingdoms) by (snow) storm, leaving those unlucky enough to have missed the show the first time around gnashing their teeth in impotent fury. Well, if your molars are just about ground down to nubs, here’s some good news: Ski Bum is back!
Described by Iron Mountain Theatre’s Jane G as a “fast-paced, shredding good time for the whole family”. the show will run during Winter Carnival weekend, January 27th and 28th, at Rossland Secondary School at 7:30pm.

Here’s the plot, courtesy of IMT: “’Ski Bum: The Musical’ tells the story of one ski bum nearly cresting over the hill, with all of his youthful energy intact…and that’s the problem. Jeff Snowden needs to grow up a little, and act more responsibly if he wants things to go his way in adulthood. When an old flame at Big Snow Peak sparks a renewed interest in Jeff’s heart, he starts to consider the benefits of gaining a level of maturity. With the help of cultural anthropologist , played by new cast member Grant Waters, studying the culture and practices of ski-bummery, and a sometimes-not-so-nice head of ski patrol, he begins to see that he doesn’t have to give up skiing and having fun in order to evolve.”

There are some changes from last year–including a new cast member.. According to Gaudet, “This year we are stoked to welcome to the cast another graduate of the Canadian College of Performing Arts: Grant Waters. We have worked with Grant in the past, so he was a natural choice. What made last year so exciting was the workshop process, literally some scenes and songs were still be written and staged even in the last days of rehearsal. So while we are still working with the same script and have brought back Shane Snow to direct, we are really getting a chance to build on what has been already created.”

In other news, the cast have recently completed recording the show’s original soundtrack, which will be available for purchase at this weekend’s performances.

This winter’s return to town caps a very exciting year for both IMT and Ski Bum. “Ski Bum’s first tour was very successful. We had a great first stop in Revelstoke that came complete with a 30cm day. We had stops in Fernie, Cranbrook, Nelson, Grand Forks, finally the tour ended with a bang in Whistler at The Telus Festival. This year tour is twice as long with more shows and we are trying hit as many ski towns as possible.

“In terms of IMT’s other shows, we had a a great experience touring through Northern BC in November with Company Jump and a seven piece swing band and will also be touring White Star Lady in April to commemorate the 100th anniversary of the sinking of The Titanic. Many thanks go out again to everyone who came out to our 2nd Annual Fundraiser, we were overwhelmed at the amount of support we received.”

In terms of the future, the troupe will be performing around BC again. “There is no doubt that we love performing this show and we are hoping for a great reception in each of the ski communities that we are travelling to this year. We’ve had discussions about trying to take the show out of BC and into Alberta and the U.S. The reality is that do to that sort of a tour we ready need to have an agent’s support and funding. We are are very thankful for all audiences that come out to support, without them the shows would not be possible- but theatre is very difficult to financially sustain without major grant funding and sponsorship. We really enjoyed the creative process of creating a new musical, and have plans to produce and workshop our new show this summer, Harms’ Way: The Untold Story of the Mennonite Mafia written by IMT co-founders R.J. Peters, Mark Pollard and Nadine Tremblay. And, yes, it will be a musical”

Who should come out to the show? Well, Gaudet is pretty specific: “So come on out you ski bums, snow bums, skinny bums, and large bums!”

Tickets are available at Rossland Pro Hardware for $15.

Posted on November 18, 2011 by ironmountaintheatre

THANK YOU all for coming to our fundraiser. We sold out of tickets at the door, were very successful at the bar and Stephanie Gauvin’s painting went home with a happy Tim Austin. So much fun! White Star Lady, Company Jump, The Sons and Ski Bum: the musical were happy to entertain you and hope you had as much fun as we did.

Check out the PHOTO highlights.

Posted on September 12, 2011 by ironmountaintheatre 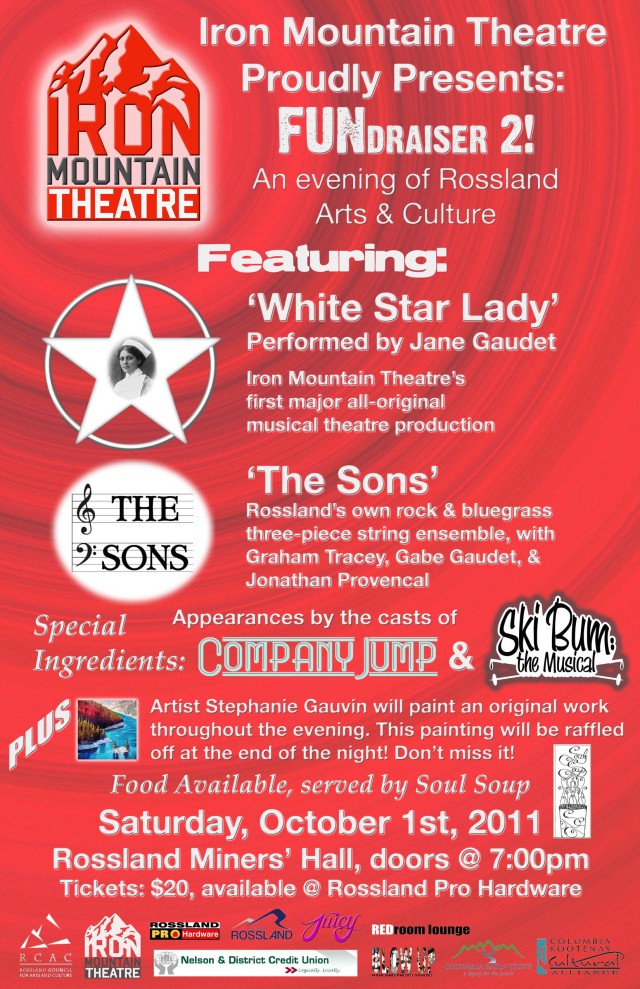 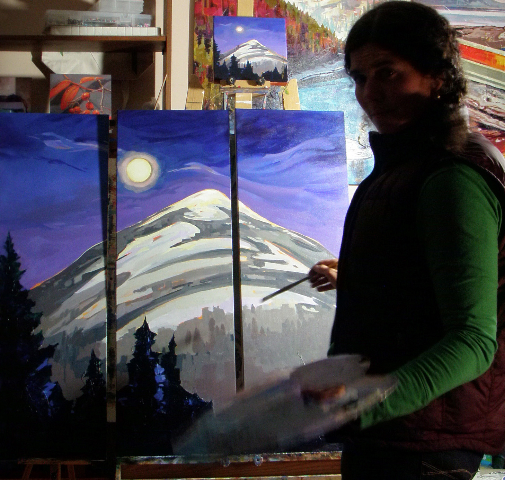 Artist Stephanie Gauvin will be painting live at this event and audience members have the chance to go home with her creation at the end of the evening.

Fundraiser Tickets available from any board member or at Pro Hardware. Hurry before it sells out.

COMPANY JUMP plays to veterans across the province

Posted on July 1, 2011 by ironmountaintheatre

What a blast is was to play to 1300 veterans at the BC Legion Convention in Penticton.  Thank you for having us! Please send us your photos and comments.

Posted on July 1, 2011 by ironmountaintheatre

Iron Mountain Theatre is living the dream. Well until we make money with it but in the meantime we are doing what we love in our spare time.

We created, produced and toured 2 new shows this year, we put on workshops with youth in Trail, ran a Glee club in Rossland, created and performed A Tribute to Mining 8 minute musical for Rossland and are loving every minute of it.

Sound equipment will be purchased this month with the generous support of The Community Initiatives grant through CBT, Trail and District Arts Council and Teck Ltd. This new acquisition will enable us to tour more affordably and play venues that are not equipped with a quality sound system.

THANK YOU TO ALL SPONSORS  for making this possible.

To celebrate Summer Iron Mountain Theatre hiked up RED mountain to get inspired. 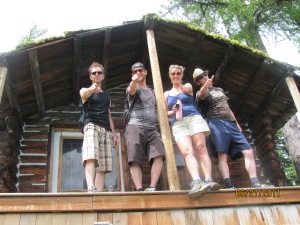 End of Season for Ski Bum: The Musical

Posted on March 15, 2011 by ironmountaintheatre

Thank you Nelson for being such a cool town to play in. We had a lot of fun and enjoyed skiing Whitewater. See Highlights below

Only 2 more venues left for this season of Ski Bum: The Musical. CRANBROOK AND WHISTLER. DO NOT MISS IT!